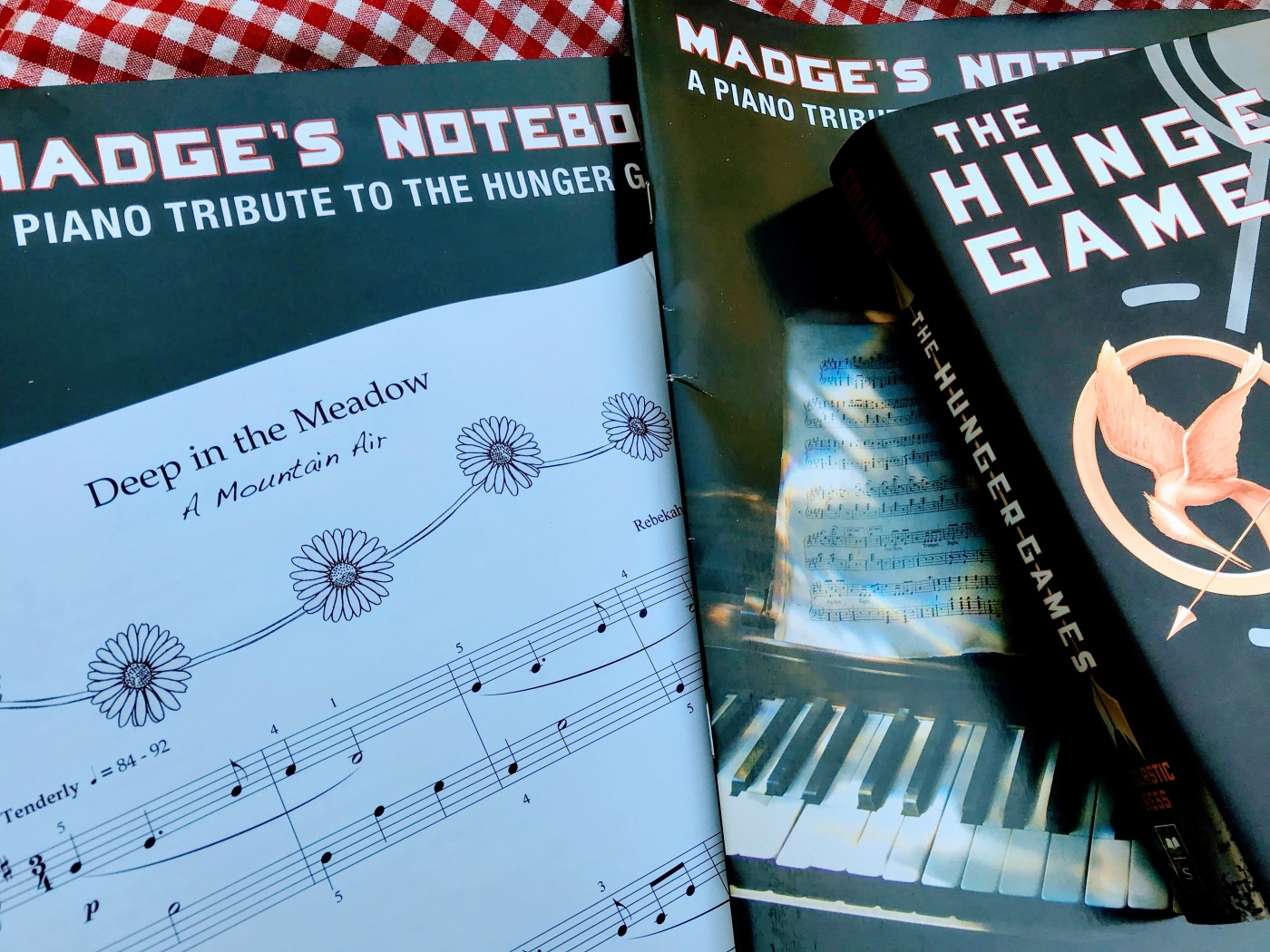 As piano students emerge from the Elementary levels of piano music into the Intermediate, a lovely thing begins to take shape in their playing: a deeper sense of personal and emotional investment in the music. They begin to go beyond simply making beautiful sounds to buying into the meaning of the music with their true feelings. The repertoire they choose means more to them than ever before.

Deep in the Meadow appeals to tweens, teens and adults playing Early Intermediate piano. It is listed in the Royal Conservatory of Music’s syllabus for Level 3 List C and can be played as a selection on the RCM Level 3 exam.

The melody in Deep in the Meadow is sweet and gentle. If you haven’t read the Hunger Games series, you can appreciate the piece simply as a tender lullaby. It stands on its own! However, the piece was originally written to Suzanne Collins’s lyrics from her popular Young Adult novel, The Hunger Games.

If you’ve read the series, you’ll remember that the traditional lullaby “Deep in the Meadow” had been sung in District 12 for generations. Katniss sang it in two tender moments: first to her little sister, Primrose, and then to a child she met in the games, Rue. After that, the song became known across Panem as Rue’s Lullaby.

But it had always been a traditional tune in District 12, and that’s why it appears in Madge’s Notebook, an imagined collection of piano pieces played by Madge, one of my favourite characters. Here’s a video of the piano piece:

Did Madge really play the piano in the books? Yes!

Inside story of composing it

Rarely have I written and rewritten a piece so many times. Sometimes it’s the simplest music that’s the most difficult to write. I wanted the piece to have an innocent yet tragic sound. Innocent because in the story it is sung to children, tragic because…you’ll have to read the books to find out.

I faced many demands:

I worked, was unsatisfied, and wrote and discarded many drafts.

Hints to understand the music

Rhythm. Here’s a video in which you’ll hear the recorded piano part accompanying Collins’s original sung lyrics. You might find it interesting to hear the words included. The lyrics can help you learn the rhythm.

After many tries I settled on the 3/4 time signature because it felt so elegant.

Melody. The tune opens in E minor with a downward-leaning figure that is repeated in sequence (the same tune repeated lower) and later varied (changed a little). I wrote this tune to sound simple like a folk song, but also to paint the words, like “deep,” “under,” and “lay down your head.” Later (in measures 15-16), the music sweeps upwards with “the sun will rise.” There’s a new level of urgency at measure 17 with the melody in the upper range, belying the lyric “here it’s safe.” The whole second half of the song is a variation of the opening, and finally settles with “Here is the place that I love you” in G major, ending in a safe place.

Sting wrote the version of the lullaby for the movie. I had great expectations. After all, I loved his simple, beautiful song Fields of Gold, and I felt he had the right stuff as a songwriter to nail this. I must admit, I was disappointed. I found his tune lacklustre and at times, awkward. Now that I’ve looked closer, I know exactly why I wasn’t convinced. Between the words “under the” there’s a tritone — an interval that’s difficult to sing in tune and rarely (if ever) appears in folk songs.

In my five-note melody, notes 2-5 are the following intervals: ascending minor 3rd, descending minor 2nd, descending Perfect 5th. In other words, Rue’s call signal from District 11 as depicted in The Hunger Games, the movie. I must emphasize that I did not write the music with this hidden quotation on purpose. It was a complete surprise when I found it. You can listen to a clip here:

Throughout the piece, my five-note tune changes and transforms to suit the words of the lullaby. But if you search through the piece, you’ll see snippets of it, mostly a descending 2nd followed by a perfect 5th, which are a diminution (smaller section) of Rue’s signal (for example, from measure 17 to 22). How many can you find?

My artistic mind loves this connection to the world of The Hunger Games. With this correlation between my lullaby melody and the signal from the movie, it’s like somewhere deep in the history of Panem the same melody became both the signal in the fields of District 11 and part of a lullaby in District 12.

Another piece I wrote for Madge’s Notebook used Rue’s four-note signal on purpose, in the Chopin-esque waltz, For Rue. This was a piece I imagined that Madge composed after she watched events unfold in the 74th Hunger Games, as a tribute to Rue. It’s a pastiche, a deliberate nod to Chopin as a composer, because I believe his music and style of writing will survive into the future.

This is music that tweens, teens and adults can play for multiple reasons: because it is good music that develops expressive playing, because it helps start conversations on what music means to our collective culture (and to individuals) in times of political conflict, and because this is music they can believe in as they find their own voices and values.

To me, music offers healing, connectedness between people from different backgrounds, and most of all, hope.

All over the globe, from the United States to Canada and beyond, children and teenagers feel the impact of conflict. It is a relevant topic, especially now. Tweens and teens are not only developing musically, but are developing a wider and maturing awareness of the world around them. Because of this, Deep in the Meadow fulfills not only musical goals but also the developmental benchmark of social awareness and responsibility.

I’ve been asked why I composed music on such a dark topic as The Hunger Games. I never viewed the artistic project that way. As I read the Hunger Games series, I heard so much music in the books. It’s reported that Suzanne Collins listened to classical music as she wrote, and it’s evident by the role music plays in the story.

Though written on the topic of political strife and how children are caught up in and traumatized by war, throughout the story music is a bright light in the dark world. Herself a child of a Vietnam War veteran, Collins wanted to write a Young Adult novel on the PTSD she had witnessed in her own father. The music throughout the story is a beacon for healing.

You and your students can play Deep in the Meadow! Madge’s Notebook is available as a print and eBook, or you can purchase the eSheet separately. Both the eBook and eSheet are studio-licensed, which means with only one purchase you can teach it to as many students as you want!

Here’s the direct link to Madge’s Notebook, the print and eBook!

Here’s the direct link to the Deep in the Meadow eSheet!

Video of the Week

The Toasting (Early Intermediate, Level 3), an imagined simple folk wedding song. From the print and eBook Madge’s Notebook, A Piano Tribute to The Hunger Games, Early Intermediate to Early Advanced piano, music that offers hope to a hurting world. Or, check out The Toasting eSheet!

This site uses Akismet to reduce spam. Learn how your comment data is processed.

This year it's so exciting in my piano studio to be encouraging my junior student, Bria, to teach beginner Ava! I've dabbled with mentorship in the past -- Bria, herself, started learning piano with my daughter, Heidi. It's amazing to watch them working together!
I’m nearly finished reading Suzanne Collins’s new Hunger Games novel, The Ballad of Songbirds and Snakes. There’s so much potential music in it! Should I write my own piano versions like I did for the original trilogy? #hungergames #suzannecollins #music #pianomusic
Here I am, preparing to send certificates, prize money and adjudications to young composers across the country. Tea in hand, stuffing envelopes, matching all of the documents up, being sure everything’s just right. And along comes Clementine. She thinks it’s all arranged nicely for her noontime nap. #youngcomposers #cfmta #composers #composercontest #prizemoney #snailmail #ragdoll #nothelping #toocute #pianoteacher #pianoteacherlife #pianocat
Out the door to send more FREE books! This month I gave away 159 FREE piano books to my newsletter recipients! Not on my newsletter list? You should be!
This month I gave away $2,400 worth of FREE piano books to my newsletter recipients! Not on my newsletter list? You should be!
Piano Studio under construction! We’re building a cat perch out of a piece of driftwood we found on the Avonport dykes last summer. Clemmie already climbs the pole, which is wrapped in hemp rope. We’re hoping she’ll climb over into the little hammoc we’re making at the top of the tree, made of a burlap vegetable bag. Clemmie is very interested in the project. My piano students love our cats. It’s always motivating when they come in for lessons. #pianostudio #pianocat #pianoteacher #pianoteacherlife #ragdollcat